Find all our current models across all sites here ... also request or suggest a model that you like to see on the sites
Reply

slickrick123 wrote:Are we gonna get some scenes from Alicia soon?? It’s been a while since she’s been shown... can u plz check for some outstanding scenes??

slickrick123 wrote:Finally my zexy account worked and I was able to check out some of the vids... one that I saw was the "open interview" from Alicia... that was well done and she played the seducing role very well!!!

I really hope u got a few more zexy vids from her in the can and please please get this girl back for more scenes!!!

Thanks for the feedback

slickrick123 wrote:I remember Steph saying that there were some uncut bb scenes left... have you managed to dig these out?

Yeah, it's in the mix to go live on the site - It'll be on around the beginning of May

laxtheman wrote:It’s been a while, can you try again for Alice? I know she’s been requested a lot but she’s worth it especially for zexy. She engages in dialogue, something zexy would benefit more of. Grateful if you can please try again!

Last time we spoke to her ( a few weeks back) she wasn't taking on work due to a problem with her Ankle - I've told her to keep us updated when she's ready to shoot.
WankitNow.com - BoppingBabes.com - DownblouseJerk.com - UpskirtJerk.com - ZexyVR.com - WankitNowVR - RealBikiniGirls.com - SexJoi.com - OnlyFans BTS

laxtheman wrote:FYI I think she shot for other sites so she may be ok now?

Thanks for the update, I noticed her on twitter today so i'll drop her a message and find out what we can do about another shoot date.

#31699  by samloan58
Thu Feb 18, 2021 3:40 am
She recently did some videos for StrictlyGlamour...hopefully she can be brought back on WIN sites (maybe we can get her to shoot some domme scenes on WIN as well

samloan58 wrote:She recently did some videos for StrictlyGlamour...hopefully she can be brought back on WIN sites (maybe we can get her to shoot some domme scenes on WIN as well

samloan58 wrote:She recently did some videos for StrictlyGlamour...hopefully she can be brought back on WIN sites (maybe we can get her to shoot some domme scenes on WIN as well

Great news! We've got Alice booked for 2022 - She'll be shooting in Jan from the 17th - 21st. Let us know any ideas for scenes! She works up to nude with JOI!
WankitNow.com - BoppingBabes.com - DownblouseJerk.com - UpskirtJerk.com - ZexyVR.com - WankitNowVR - RealBikiniGirls.com - SexJoi.com - OnlyFans BTS

Hopefully we can get her to bring the right outfit for it.

It's Friday, and you are heading off from work early to spend some quality time with your wife. However, your boss calls you into her office last minute to talk to you. She asks you about why you are leaving early, and you provide her the reason. She tells you that she needs everyone working for the entirety of their shifts today. Alluding to the near future, she says something like, "Also, shouldn't I be the most important woman in your life?" She tells you that she will let you leave early if you can stop yourself from cumming within 10 minutes of her JOI. Seeing that she is wearing a frumpy work coat which is not at all sexy, you feel confident in accepting her challenge. As soon as you accept, she takes off her glasses, her coat, and unties/unclips her hair. Underneath the coat, she is wearing a sheer robe along with some sexy matching lingerie. She playfully says something along the lines of, "Oops, I may have forgotten to tell you about what I had underneath, but a deal's a deal." She then gives you JOI, and tells you to match your strokes to the taps of her heels (as in she crosses her legs and makes a tapping motion with her heel in the air). Probably a pair of black heels would work best here. She slowly starts stripping. As it is nearing the 9 minute mark, she gets frustrated with your ability to control yourself from cumming, and increases the taps of her heel. She eventually succeeds in making you orgasm. The scene ends with her laughing at you, and telling you to fuck off back to your desk and keep working.

In terms of an outfit selection for Alicia for this scene:

A pair of glasses.
A pair of black heels.
A coat which covers what she is wearing underneath, and one which isn't particularly sexy.

Her hair being tied up or held in place with either a clip/band.

Let's ask her to bring her sheer robe and lingerie she wore in this picture: 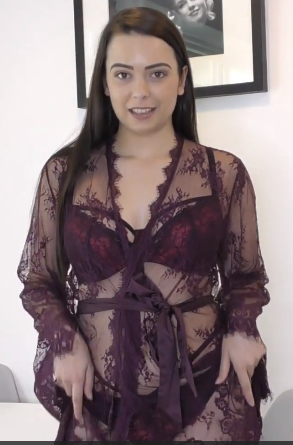 Also, if she could do her makeup like in this picture, I think it would work well with the dominant boss persona: 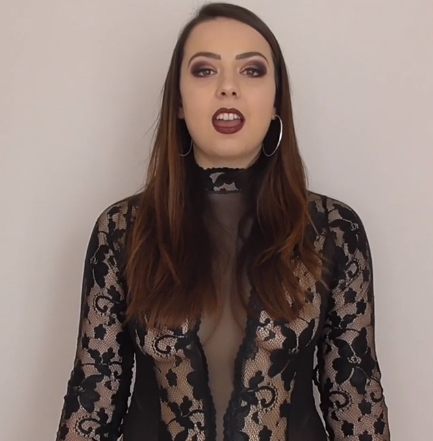 If she can't bring the robe/lingerie, her wearing the outfit in the above picture can also work.

Should be a simple scene to shoot. Looking forward to it!